I’ve taken part of the second cohort of the Plutus Pioneer Program where one can learn how to write Smart Contracts in Cardano by using Plutus, set for main chain release in late 2021.

Cardano’s version of Smart Contract is pretty “weird” coming from Ethereum, and I plan to write about it later but it does provide some interesting abstractions that let you express common patterns rather easily, in particular we are going to be covering how you can model your DApp as a state machine and how can you express said model in Plutus pretty easily.

Cardano’s Smart Contracts are written in a Haskell library called Plutus, so put up your functional programming hat and let’s get our hands dirty.

Note: at the time of writing there still some wrinkles in Cardano’s smart contract platform, so if you are not part of the Plutus Pioneer Program you might have some difficulties running the code, but hopefully it will be a nice showcase of how Cardano enables smart contracts. Also, State Machines are just a higher level abstraction to write smart contracts in Cardano but not at all the only way, so you are not limited to them.

Plutus smart contracts should be called Smart Transactions because that is all you can really do on-chain.

From the outside, users can only generate Transactions with inputs (UTxOs or unspent transaction outputs of previous transactions) and generate outputs (also UTxOs) at different public key addresses depending on the use case.

These transactions are created off-chain and sent along with a trivial payload called the Redeemer.

A transaction is only applied to the blockchain after being validated by Validator script which is the main thing DApp developers write and run on-chain.

This validator script has a public key address made up of its hash and funds (UTxOs) can only be spent if the transaction trying to spend them passes the validation, which is the business logic running on-chain.

A UTxO contains coins or Native Tokens plus a trivial custom payload called the Datum, which serves as a custom application state and is central to the ability to write DApps.

The main difference between user accounts and script accounts is that user accounts need to sign spending transactions with their private key but anyone can spend from a script address if the transaction is considered valid by the validator script itself. Is a pretty interesting model.

All this is part of the EUTxO model or the Extended Unspect Transaction Output which is the model pioneered by Bitcoin with some extensions to allow smart contracts.

Surprisingly this model allows pretty much all what you would expect from a smart contract platform, it is just modeled differently and does comes with trade-offs. It is similar to what functional programming brings to the table in terms of predictability, testability and simpler interfaces comparing it to imperative or object oriented programming, so we could say that Cardano is a platform for pure functional smart contracts.

We are going write the Rock Paper Scissors game but in the blockchain, I eventually will like to really deploy it and add a nice UI on top of it.

The model we are going to use makes the first player commit to a play but without telling exactly the play by using a hash, then the second player plays, and finally the first player reveals and the “stake” or “bet” is distributed. There are also play deadlines and reveal deadlines to make the contract safe.

Here is a complete state diagram of our game model. The transitions are labeled with the Redeemer and its payload, constraints and checks. Constraints are common transaction constraints that Plutus provides abstractions for and checks are anything else developers might want to check to allow or not a given state transition. In our case we only use checks in the chase of Player1RevealWin and Player1RevealDraw, where we check that effectively it is a win or a draw for Player1. The state are composed of Datum which holds trivial data plus the staked / bet value. 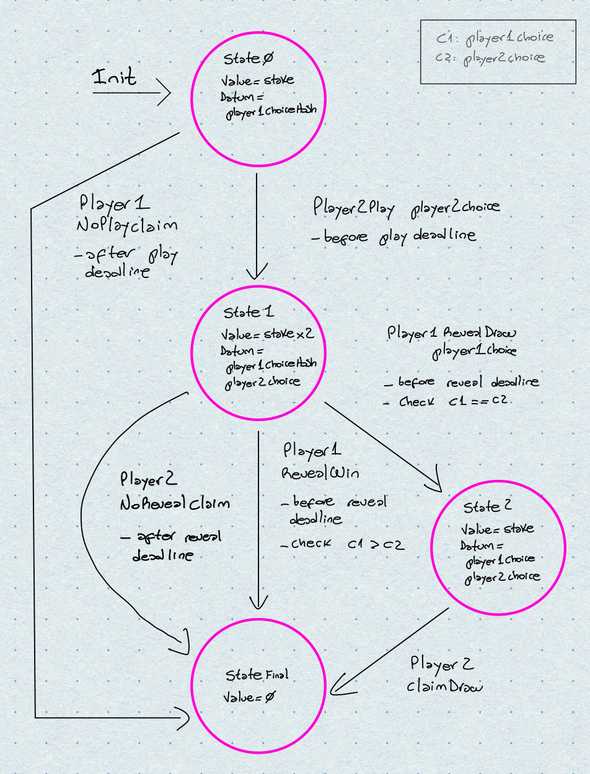 As we said before, the Datum will be a trivial piece of data we are going to store on-chain. In this particular case we are going to use it to store the current state of our state machine plus the choices made by players.

These are the actions players can take to move the game state around.

This is the abstraction on top of a regular validator script that Plutus provides in order to model the common case of a State Machine.

We are only going to show one of the main happy paths, player 1 plays, then player 2 plays, finally player 1 reveals and win:

constraints are a Plutus primitive that lets you express checks for the incoming transaction, have in mind that this validator runs whenever some trivial address is trying to consume one of its UTxOs, so in order to spend a UTxO the validator needs to agree with said action.

In this case we are only allowing this particular state change to happen if the transaction trying to be applied is signed by Player2 and it is done before the playDeadline.

We return the next State defined in datum and we duplicate the stake amount of Ada because Player2 needs to stake or bet in order to participate.

Additional checks can be done by implementing a check function, here is an example of how we use it to add an extra check to the Player1RevealWin transition. We simply check that the revealed choice that Player1 made actually wins Player2’s:

Plutus is heavy on the Off-chain code, but it is safe to do so because the important constraints should always be implemented on the validators.

The off-chain code, also written in Haskell and that will be later allowed to be run in the browser simply allows two users to play this game. The first player instantiates the contract by playing secretly and adding a stake.

Player2 plays by finding an open game and playing and staking.

When the deadlines are passed a winner is decided and the reward (staked) is claimed.

Nothing illegal should be allowed to happen because our on-chain code (validator) should only allow certain valid transactions to happen and nothing else.

Cardano and Plutus are really fun and interesting and there is a lot of things coming their way that make me super excited about.

I’m anxious about actually deploying this dummy game to the main net and add a nice UI on top of it.