Cardano’s take on DApps is substantially different from that of Ethereum, the top DApp platform today, and by taking this route Cardano achieves better correctness guaranties that aim to prevent costly bugs and exploits.

Cardano will never have smart contracts, instead it will have Smart Transactions, which is a much more accurate name for its DApp platform in my opinion.

Cardano uses the EUTxO model which stands for Extended Unspent Transaction Output. This might ring a bell because the UTxO model is what Bitcoin pioneered and to a point extended in order to allow Bitcoin’s limited scripting capabilities. But Cardano takes it all the way and by extending the UTxO model, it achieves full blown DApp platform status.

The UTxO model, at a high level, is composed of transactions and unspent transaction outputs. 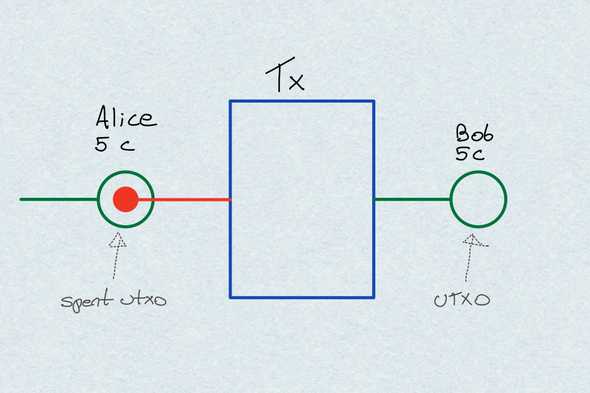 All utxos for a given account make up the available balance of said account. And all the spent outputs are the spending history of that account. When Alice sends Bob 5 coins she simply consumes one utxo of 5 coins in her account and produce a new utxo of 5 coins in Bob’s account through a transaction.

To know the full balance of a given account you would need to query the blockchain for every utxo for that account or sitting at that account.

From this simple explanation you can have a better understanding on why Bitcoin transaction regularly have “change”, because if Alice has only a utxo with 10 coins and wants to send 5 coins to Bob then that entire utxo will be consumed by a transaction and two new utxos will be created, one for Bob with 5 coins and second one with Alice’s change: 5 coins.

The EUTxO model only adds a couple of things to enable DApps:

Utxos can contain a Datum which is an arbitrary piece of data that is stored on-chain. This is typically used as part of your DApp’s state. Let’s say your DApp is a Price Oracle, then where would you store price feeds? You guessed it: in the Datum.

Special script addresses are allowed. They behave pretty much like a regular address and can receive and spend utxos. The script itself is a Validator function written in Haskell and Plutus that runs on-chain every time someone tries to spend utxos sitting at the script address. This is the main on-chain logic in Cardano’s DApps, it is the closest to a Ethereum’s smart contract but it is radically different in scope and functionality.

Scripts act as pure functions that receive the transaction where the utxo spending is happening, the Redeemer (explained next) and the entire utxo that someone is trying to spend which contains any coins and Native Tokens balances together with a Datum if any.

Scripts don’t have access to anything else, they cannot create transactions, only validate them, they cannot call other things on chain. These are the main differences with Ethereum’s Smart Contracts.

Side note: Native Tokens are any custom made token that Cardano treats as Ada, this abstracts away the contracts needed to deploy these tokens (i.e. look at the ERC20 standard contract) and reduces the fees for operating with these tokens to the ground (compared to what a USDC transaction can cost in Ethereum’s mainnet).

The Redeemer is an arbitrary piece of data you can pass to the validator when creating a transaction that spends utxos from that validator, it is a way of parametrizing the validator to allow things such as state machines and different actions being performed in a DApp.

With all these extensions Cardano achieves a full blown DApp platform with similar capabilities to Ethereum and others but with stronger correctness guarantees making it more difficult for developers to royally screw it up as it has been shown time and time again.

This model requires thicker clients that have more things to do than in Ethereum’s DApps, so you could say that Cardano DApps are heavier on the client than on the server, but all this happens without sacrificing correctness and the dev toolkit even allows to write client side code in the same language, Haskell, and with the same tools, Plutus, than the on-chain code, making it simpler to share logic and ensure your code is correct.

The final piece of the puzzle is the PAB which will allow DApps to run directly in the browser like Ethereum DApps. The PAB will be released soon. In the mean time developers will need to run backend services in order to communicate with the blockchain so DApps are still possible even without the PAB.

I am really excited about Cardano’s potential as a DApp platform, together with the EUTxO model and features such as Native Token that allow for very easy and cheap custom coins (like USDC or NFTs being treated like Ada with the same low fees) the future does seem bright for Cardano.

Cardano will never have smart contracts, it will have Smart Transactions and will have full blow support for DApps#