If this got your attention read on:

In general computer programs can be:

And how do these translate into Front End apps and in particular React apps?

Although this will not be the focus of this post let’s quickly cover some important areas where solutions and improvements might be found for io-bound problems:

This is going to be the main focus of this post.

Before talking about performance we need to define it in a more concrete way:

This all boils down to the concept of fps or Frames Per Second. Responsive UIs will deliver a minimum of 30 fps or more ideally 60 fps, this means that every frame of your app, even the more demanding code paths, should compute in 30 ms or less.

If your Javascript is slow it might cause “frames to be dropped” which means computing a frame in more than 30 ms.

To fully understand how this applies to React we need to understand how React works and what React’s render and commit phase are but in short we can say that:

If a React component update is triggered then the entire sub tree needs to be rendered in less than 30ms.

This becomes specially problematic when you have complex and long component structures such as Tables, Trees and Lists and in which sometimes (for example the first time) you will need to re render large parts of them.

Summary: we should figure out which expensive interactions are dropping frames, measure them to confirm and fix them.

React works (at a high level) in two phases

This whole process needs to happen in less than 30 or 16 ms (30 fps and 60 fps respectively) for your UI to be considered responsive, as you can see there’s a lot of work and that work is proportional to the size of your app.

We will explore ways to make mostly the Render phase more efficient but first let’s discuss how to measure and how to find out what are the slow parts of our app and how bad they are.

In 2020 we have pretty solid tools for measuring browser side performance, these are the ones I use the most:

This is the most comprehensive tool, it is useful for any browser application, it measures frames per second, records stack traces, identifies slow / hot parts of your code, and much more. The main UI is the flame chart.

You need to install the React dev tool extension in your browser.

It specializes the information in the Chrome dev tool’s Performance tab to React. You can see the different commit phases and the Javascript code that was run in its respective render phase through a flame chart.

Through this tool you can easily find out:

This is the methodology I like to use when measuring front end applications:

If you optimize something without measuring then you are practically doing nothing.

There might be cases where the problem is super obvious and I won’t tell you that going straight to fixing it is naturally bad, but most of the problems are not obvious and measuring will be cornerstone of the performance improvement process.

Additionally, if you measure you can later tell your users, stakeholders and more importantly your boss that you have improved the performance of a given area of your app by x% which is always a good way of communicating upwards what we accomplish inside the rabbit hole.

Now that we have measured and identified the problematic areas let’s cover potential solutions.

Identifying the slow parts of our React app will usually point out to some particular components that are slow to render (or that have too many instances in a single page, more on this in the which section).

There might be a number of reasons those components are slow, including:

Most of these boil down to improving how fast your components render, sometimes critical components cannot rely on too complicated libraries and so you need to go back to basic and roll your own simpler implementation.

I have experienced something like this when using Formik (which I love) or should I say abusing Formik on several cells of every single row of a complex table.

You can go a long way making your components more efficient but eventually you will need to focus on which components render:

There are two broad categories where we can improve this aspect:

This is great because it can be applied to complex UIs without going through the what step, although I recommend it; and modern libraries tend to have decent support for virtualizing your tables and lists. A good example of this is react-virtualized.

Virtualizing means that we reduce the amount of components React needs to render in a given frame.

React tries to make your components look like pure functions but still will try to render more times than it should.

Most components in React can be memoized, which means that they do not have internal side effects or depend on any external side effects so that we can guarantee than with the same props the component will return the same tree (hooks, state and context are still respected though).

For that we can use React.memo. This tells React to skip re rendering these memoized components if their props didn’t change.

Additionally we have the problem of fake prop changes which means that although the content of a given prop didn’t change, the reference did. The most classic example of this is the event handler one:

The onChange callback, although semantically and content wise will be the same on every render, will be be stored in a completely separate memory direction so React will detect it as different from the previous one.

This is related to how React.memo does shallow comparison by default (although there’s no good way of deeply comparing functions in Javascript AFAIK).

An easy fix for this is to use useCallback which was designed exactly for this:

A similar problem can rise when building complex data structures and not memoizing them correctly before passing them as props.

This means that on every render we are re creating the rows array, and although the content might not change, the shallow compare with the previous version will mark it as different. To solve this React provides useMemo:

This will ensure rows are only recalculated when the dependencies change (most likely props or state).

You can also customize the way React.memo compares current vs previous props but be aware that this calculation should be fast since it is effectively part of the Render phase and you probably don’t want to perform trivially nested deep comparisons on every render.

The React profile is really good at telling you why a given component rendered out of the three main options. Let’s cover each option and potential paths of improvements 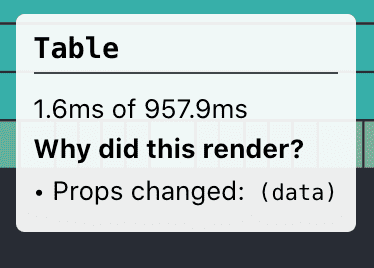 Did they really? Are they fake prop changes? Use useCallback and useMemo.

Use React.memo to memoize your pure components.

Nothing too obvious to do here. Try to validate that the hook that changed makes sense. Perhaps a bad context provider is faking out changes the same way as fake prop changes might appear.

By now you should feel pretty confident in your skills to identify and improve Performance problems in React. Of course theory and practice are different beasts but your problem wont be far away from the ones we’ve covered, perhaps you will have to deal with library updates, or components out of your control but that’s life!