Do you dislike this statement? I do too. Read on.

Isn’t it weird how a lot of developers maintain these sort of inside jokes / memes of hating certain tools and techniques like programming languages or frameworks?

It is not the criticism that I find peculiar but the emotional subjective response these folk have toward inanimate things. Let’s unpack this aspect of developer culture that we see everyday everywhere.

I have heard these at work, at open source communities and by speakers in conferences and although it is entirely fine for people to resonate and feel more comfortable with certain tools and techniques I believe that is better to take a step back and try to think about these tools more objectively, without so much emotion and with a cool head, if we do that then we can understand the trade offs each tool has and why was it built like that and, although we might never use it, we will most likely understand why other people might, when we might want to consider using it and the reasoning behind the decisions that lead to that result, which in programming are most likely things we can extrapolate to other areas and maintain a more rich and broad understanding of the vast programming landscape.

So for example, the other day I saw this meme used for a quick laugh at mostly Javascript. 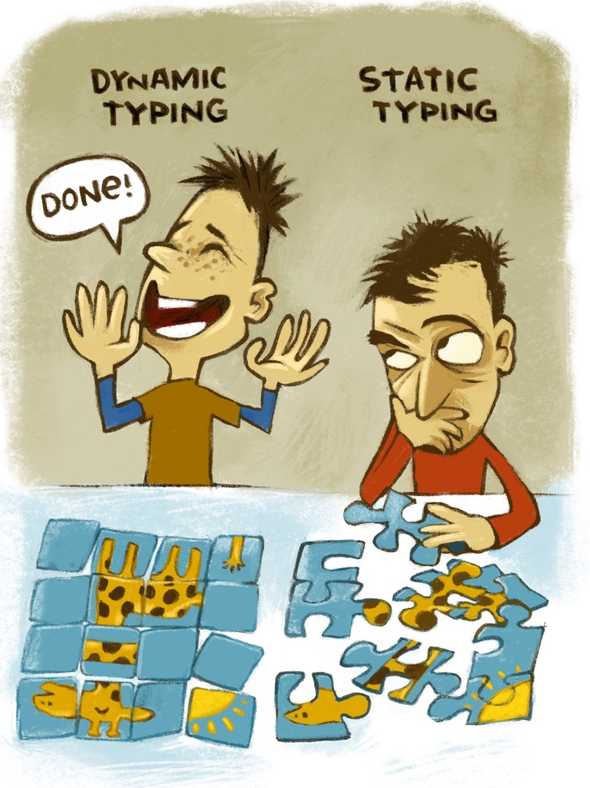 And while I always enjoy a quick laugh, sometimes these type of “jokes” hide a skew, subjective and over simplified way of looking at things.

There is some nuance between the mechanisms by which different programming languages allow developers to express logic and constraints, and how and when they are verified and the errors are handled, one could generalize Statically Typed languages as allowing more mechanisms to express and verify constraints early on (mostly at build time) and Dynamically Typed languages relying on later “out of band” constraint verifications i.e. like doing more automated or manual testing and by doing that they allow faster times to first run.

After a lot of time spent in Dynamically Typed languages such as Javascript and Python now I really value a good Statically typed language and most of the time I do prefer them over untyped because of the capability of Statically verifying correctness of my program at least partially, because of the autocompletion among other things, that is why now a days if I get to chose I only write Typescript and typed Python.

The answer is a definitive no.

This article has some good illustrations of this.

There is a multi dimensional space that has axis such as development speed, correctness verification, memory safety, performance, ergonomics, etc that Programming Languages need to navigate.

In particular, programming languages will be better at some of these dimensions and worse at others, right now there isn’t a perfect language that maximises all dimensions although there has been an explosion of programming languages in the past 10 years with things such as Go, Rust, C#, Typescript, among others that take a lot of the lessons of the past and overall they achieve more than previous languages, only because of the iterative effect of technology.

Rust maximises correctness, memory safety and performance, but that makes it more difficult to understand for newcomers in general.

Take Rust for example, which I really like and that has taught me a lot, it is a language that tries to maximise correctness, memory safety and performance and the Rust team understands perfectly that these things hurt expressiveness and development speed and although they actively try to improve the developer experience they always maximise correctness, memory safety and performance first, and never they hurt those core values because of developer experience, and so Rust is widely known as a language on the hard to learn side, verbose and that for certain highly dynamic cases you will end up both struggling and resorting to a variety of escape hatches.

But in a lot of ways Rust is better than its peers (C / C++ mostly), it has better memory safety, a much more expressive Type system, it provides higher level abstractions that compile down to very efficient code, it does have a modern module system instead of the header file system that I do believe is outdated and verbose, it replaces C/C++ build config files such as Makefiles (and others) with a standard abstraction: cargo, it provides a single standard mechanism for library publishing, distribution and consumption: cargo and crates.io instead of the multiple non standard ways C/C++ deal with these sort of things.

But this is also not about bashing C/C++ which, although they have drawbacks as every tool out there, are super mature tools with mature ecosystems, libraries, documentation, etc, that are hard to beat in a lot of senses, in fact a lot of the major mission critical software we use currently relies heavily on them like openssl, Linux which is the base for android, to name a few. C++ in particular has made a lot of strives towards correctness, ergonomics and more and if you really need the performance, C/C++ are conservative choices that will most likely work.

And what about PHP? Have you seen it recently? It is far from a perfect language and I personally do not resonate with it but it has come a long way from its very humble and chaotic beginnings. Recently it has added type hints, partial static type checking, it has added traits, has increased its performance, and with modern frameworks such as Laravel developers can actually write very decent programs with it. And let’s not mention the amount of community support, pervasive cheap hosting and more that it has.

Let me try to list some of the important aspects I consider when trying to evaluate programming tools objectively. Again, you and your team will most likely use your subjective biases to select them but I do believe it is nice to have at least a semi structured, objective, way of evaluating tools like Programming languages

So for example, you might like Rust because of its performance, memory safety and correctness but you want to do Machine Learning then you most likely will need to use Python because of its blooming ecosystem, and although you can statically check modern Python you will most likely work with untyped codebases or examples and if you give it a chance you will end up understanding where it’s coming from.

Another nice example is the infamous Javascript’s event-loop. I’ve heard so many people bashing it, complaining about Js not having threads, complaining about this weird thing that an event loop is, but with async / await and promises you get a very ergonomic way of expressing concurrent “tasks” without resorting to manual thread managing which is a well known hard thing to do 100% correct. In fact there are user level implementations of event loops in C and Rust (and probably in a lot more places) where although these languages support threads they recognise that for certain applications having an event loop is a pretty good way of managing concurrent tasks. Another modern way of managing concurrent task is Go’s goroutines, that have a higher level api that hides the manual managing of threads.

Is Javascript the best programming language in the world?

For example, in my opinion, closures and functions as a first class citizens make up very expressive and powerful primitives to build complex abstractions on top of, in fact these things are inherited from the lisp family and are well understood tools, from the blooming origins of Computer Science and programming languages. We cannot also deny that, although extremely chaotic, the NPM ecosystem is a boilerplate of very good ideas that have shaped the way we develop Javascript applications.

Does Javascript has bad parts? Lots! In fact there’s a now mostly outdated but very popular book about that. But Javascript is starting to pick up the pace and has made huge improvements in the past couple of years with native module syntax which is very good in my opinion (although native support is still far behind), native class support that mostly works as you’d expect it, user land hygienic macro system: babel, blooming statically typed variants such as Typescript and Flow and so much more make Javascript a very solid choice for a lot of projects.

Is it the best for all projects? Most likely not, but understanding its trade off will give you solid fundamentals to make up a better educated choice of your tool.

Why do we love or hate inanimate things?

I think that the toxic hate you sometimes see in programming boils down to 1) we tend to fall in love with certain tools because of all the amazing things we can accomplish with them and this love also generates hate towards obvious competitors (i.e. Dynamically vs Statically typed languages); and 2) because of the meme quality of these tropes we as a developers maintain over time; these rules of thumb that lead as to say things such as “Statically typing is bad because Java is verbose, you better use Node.js”. This is sometimes referred to as Cargo Cult

So we build these sort of prejudice and ill informed conceptions of tools that we might only understand superficially instead of objectively and holistically, and this is something that seems to be part of the human nature since we build prejudice for people, animals, tools, places, etc. Humans are emotional beings and we require a conscious effort to avoid having raw emotional subjective responses to everything around us, but that’s just the Engineer mind set that ends up being more constructive and positive for our careers.

Programming is such a new and exciting but very complex discipline that the variety of solutions for a given problem might be very large and it is important that we as developers develop (pun intended) an objective way of understanding these solutions, their trade offs and how to chose among them; and perhaps how to combine them and add up their strengths. In end there will be always tools we enjoy using more than others but that doesn’t necessarily mean that those tools are objectively universally better and the others are trash, it just that we like them, they resonate with our minds or perhaps we simply got more experience with them.

And perhaps some day we will find out the perfect programming language but we would still need to consider its ecosystem, support, community experience, developers available and so many other things before adopting it to our projects.

In the end, this post is just me giving a message of understanding, empathy and compassion for our fellow developers that try to make a living in this very complex world of programming.